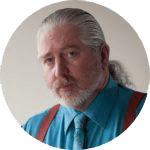 Rick is the founder, and currently the only, attorney at Fresno Injury Law®. He graduated from San Joaquin College of Law in 2006, and after taking the Bar, was sworn in on April 17, 2017.

For the first part of his career as a lawyer, Rick practiced exclusively criminal defense, including both the defense of adults, and juveniles. If you do a Google® search for his criminal practice, you will see that he has been highly successful at that, and well-respected as a fighter.

One of the advantages of having worked criminal defense is that Rick is familiar with going to trial. (Trade secret: not a lot of personal injury lawyers ever have the opportunity to go to trial.)

In addition, Rick has attended Gerry Spence's famous Trial Lawyers College, often referred to as “TLC,” or “The Ranch” (because it is on a secluded ranch near Dubois, Wyoming, for the last three years. There, he has learned advanced trial techniques involving psychodrama, which allow him to more easily learn, more deeply understand, and more readily communicate his clients' stories.

Rick brings the same passion that has driven him to the top of the criminal defense world to his work in personal injury law.

Rick's past history made personal injury law a natural choice for him. As a teenager, one of Rick's first jobs was working as a nursing assistant. On graduating high school, he joined the Navy Hospital Corps, serving aboard the USS Anchorage (LSD 36, a Landing Ship Dock), as one of four corpsmen. Rick was responsible for helping run sick bay, aboard a ship without an on-board doctor.

After leaving the Navy, Rick worked as an emergency room technician, and as an ambulance attendant.

These jobs in the medical field have helped Rick to quickly understand the medical reports which will be important to your case. With Rick's fighting instincts, and knowledge of medical issues, you can be sure that your case is in the right hands.